Looking for something new to read while you wait for Be Still My Love to come out? Check out Pillow Talk Books for the latest and greatest book deals.

Inspiration for Be Still My Heart

My inspiration for my first book came down to two nights, seven years ago. A great friend of mine from high school asked if I wanted to go to a concert with her. Her brother in law worked for a popular band that was touring and we were welcome to hang out when they were in town. VIP guests with all access, something I have dreamed about my whole life. Literally, a dream can come true.

Let me start a little further back.

As a young girl, during a time in my life that was difficult and full of heartache, I was always able to find an escape and happiness in music…more specifically New Kids on the Block. Now, I know I am not the only one alone in this. They were a band that a lot of teenage girls lost themselves in…and surprisingly as grown women, we still do. But back in the day, there was no internet, no social media, no cell phones or selfies. We could only dream about getting nosebleed concert tickets after waiting in line all night, outside our local record store, in the cold, for those horrible tickets. Getting front row or a meet and greet, wasn’t even a possibility. I’m not even sure it existed. It was a mystical unicorn that lived only in our dreams. We also had to go off of the old rumor mill as to where we thought they might show up when they were in town. Once I waited in a restaurant with my mom and a friend all night for them to show up…and of course, they never did.

So now, as an adult when the opportunity came up to buy a meet and greet with front row tickets, I had to do it. The cost didn’t matter. I know a lot of people don’t understand that, but when you dream of meeting someone your whole life and the opportunity finally presents itself…you do it.  Right? Now in the age of social media, you can talk to your favorite stars and if you get lucky you might even get some hints as to where they will be and when. It’s a whole new world and I was going to use that to my advantage.

While it was a dream come true to finally meet my teenage crushes, it was more about the experience. Now, it wasn’t my visit with New Kids on the Block that inspired my book. I know…shocking. I had to start with that first because that is where my love for music started. That deep desire to be with “the boys in the band.” I always dreamed of working in the industry and touring with a famous artist. Never on stage, but behind the scenes…I just wanted to be part of something big. So, when my friend invited me to hang out on tour with the band Seether, I had to go. Not for a crush, because while I knew their music, I honestly didn’t know much about the band. It was again, for the experience. I wanted to see what really went on backstage and behind the scenes. What was life really like on a tour bus? What really happened in those dressing rooms and after parties? And boy, did I find out. Just two nights with the band gave me all the inspiration I needed for my book. (It just took me 6 years to get up enough courage to write it.)

Is Be Still My Heart true? No. Not even close. The events from my time with Seether, just inspired me. If gave me the knowledge I needed to paint a picture of Rockstar life. Amber and Kris are 100% fictional characters and so is their romance along with all the events that happened. But I will share these little fun facts I used:

Now all this, just to give you a little glimpse into my world and what inspired my writing. I still don’t work in the music industry…it’s a little hard to tour when you have a family and being a full-time groupie doesn’t exactly pay the bills. So, for now, I will live through Kris and Amber and I will visit the New Kids on the Block when they tour and continue to hand them over obscene amounts of money because the experiences are that addicting.  I did one this year and I immediately was ready to buy ten more if I could have.

I’ve hung out with rockstars and famous people before and it was cool, but wasn’t a big deal for me. But when I hugged Donnie Wahlberg and held an actual conversation with him and then he held my hand for a full 30 seconds on stage…I turned into a 12-year-old fangirl and geeked out. Cannot even lie about that one. Because sometimes….it’s just that one dream that brings you back to that safe place, that happy place, away from all the stress and drama of life. And that’s….why I love music and why I write about it!

Special thank you to my girl Jill for this experience along with Bryan, Dale, and the Merch guy. All shown in the pictures below. And Donnie Wahlberg (not pictured) for holding my hand. 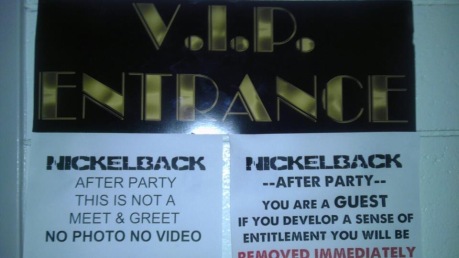 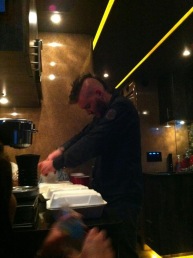